“Dwight K. Schrute, (Acting) Manager” is the 24th episode of the seventh season of the American comedy television series The Office and the show’s 150th episode overall. The episode was written by Justin Spitzer and directed by Troy Miller. It originally aired in the United States on May 12, 2011 on NBC. The episode also features guest appearances from Kathy Bates, Cody Horn and Michael Schur.

The series depicts the everyday lives of office employees in the Scranton, Pennsylvania branch of the fictional Dunder Mifflin Paper Company. In the episode, Dwight becomes the interim regional manager, instituting a typically heavy-handed management style. Meanwhile, Gabe tries to win back Erin, but Andy gets in his way.

The episode received positive reviews from critics, with many commenting that it proved the series could survive without the lead actor, Steve Carell, and others calling it the best episode of the series in years. According to Nielsen Media Research, “Dwight K. Schrute, (Acting) Manager” drew an estimated 6.45 million viewers and earned a 3.3 rating/8% share among those aged 18–49, making it the second-lowest-rated episode of the season after “Todd Packer”. 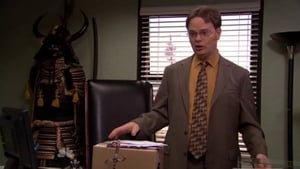