“The Inner Circle” is the twenty-third episode of the seventh season of the American comedy television series The Office and the show’s 149th episode overall. The episode originally aired on May 5, 2011, on NBC. The episode also marked Will Ferrell’s final appearance as Deangelo, having signed up for four episodes. Cody Horn also makes her first guest appearance for the series as Jordan Garfield.

The series depicts the everyday lives of office employees in the Scranton, Pennsylvania branch of the fictional Dunder Mifflin Paper Company. In this episode, new office manager Deangelo begins picking favorites among the staff, revealing his true management style. After he only picks men to join his “inner circle”, many of the female staffers begin to believe he is sexist.

The episode was written by Charlie Grandy and directed by Matt Sohn. The episode marks the first episode since Steve Carell left the series as a series regular. “The Inner Circle” received mixed reviews from critics, with many commenting on Ferrell’s performance, comments ranging from positive to negative. According to Nielsen Media Research, the episode was viewed by an estimated 6.90 million households and received a 3.5 Nielsen rating and 10% share among adults between the ages of 18 and 49 marking a drop in the ratings from the previous episode, “Goodbye, Michael”. 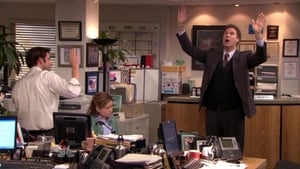