“Koi Pond” is the 8th episode of the sixth season of the U.S. comedy series The Office and the show’s 108th episode overall. It was written by Warren Lieberstein and Halsted Sullivan and directed by Reggie Hudlin. It originally aired on NBC on October 29, 2009.

The series—presented as if it were a real documentary—depicts the everyday lives of office employees in the Scranton, Pennsylvania, branch of the fictional Dunder Mifflin Paper Company. In this episode, Michael and Jim head off to a meeting and Michael comes back soaked after having fallen in a koi pond. Meanwhile, Pam and Andy, as the two worst salesmen in the branch, have to go cold calling for sales. 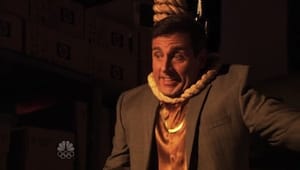