“Mafia” is the 6th episode of the sixth season of the U.S. comedy series The Office and the show’s 106th episode overall and originally aired on October 15, 2009 on NBC.

The series—presented as if it were a real documentary—depicts the everyday lives of office employees in the Scranton, Pennsylvania, branch of the fictional Dunder Mifflin Paper Company. In this episode, Michael Scott becomes convinced that an insurance salesman visiting the office is a part of the mafia, and Dwight Schrute and Andy Bernard accompany Michael to a meeting with him. Meanwhile, Kevin Malone accidentally cancels Jim’s credit card, while Jim Halpert and Pam Halpert are on their honeymoon in Puerto Rico.

It was written by Brent Forrester and directed by David Rogers. “Mafia” received positive reviews from critics and was viewed by an estimated 8.03 million viewers and received a 4.1/10 in the 18-49 demographic. 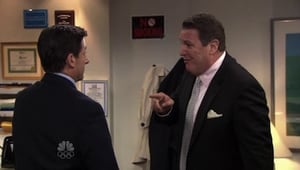