“Scott’s Tots” is the twelfth episode of the sixth season of the U.S. comedy series The Office and the show’s 112th episode overall. It was written by Gene Stupnitsky & Lee Eisenberg and directed by B. J. Novak, marking his directorial debut on the network series. It aired in the United States on NBC on December 3, 2009. Gene Stupnitsky and Lee Eisenberg submitted this episode for the 2010 Emmys.

The series—presented as if it were a real documentary—depicts the everyday lives of office employees in the Scranton, Pennsylvania, branch of the fictional Dunder Mifflin Paper Company. In the episode, Michael Scott and Erin Hannon meet “Scott’s Tots”, a group of local teenagers whose college tuition was promised in one of Michael’s grand delusions ten years prior. Meanwhile, in Michael’s absence, Dwight Schrute convinces Jim Halpert to start an employee-of-the-month program with the intention of sabotaging Jim. 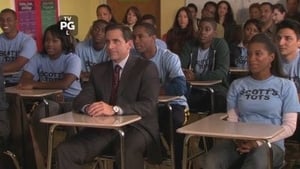