“Murder” is the tenth episode of the sixth season of the U.S. comedy series The Office and the show’s 110th episode overall. It was written by Daniel Chun and directed by Greg Daniels. It originally aired on the National Broadcasting Company on November 12, 2009. The episode guest stars Andy Buckley as David Wallace, although he only appears via the phone.

The series—presented as if it were a real documentary—depicts the everyday lives of office employees in the Scranton, Pennsylvania, branch of the fictional Dunder Mifflin Paper Company. In the episode, rumors spread that Dunder Mifflin is in financial trouble, so Michael Scott tries to distract the office by having everyone play a murder mystery game called Belles, Bourbon, and Bullets. Meanwhile, Andy Bernard uses the game as a way to ask out Erin, but fears he may have asked out Erin’s character, instead of Erin herself.

“Murder” was the first entry in the series written by Chun, and was his first script for the series. The episode also was the inception of two major story arcs, the first being the season-long arc of Dunder Mifflin going out of business and its purchase by the printer company Sabre in the episode of the same name, and the second being the budding romance between Andy and Erin. The episode scored a 4.2/10 rating share in the 18- to 49-year-old demographic, and was watched by 8.046 million viewers. The episode received largely positive reviews from critics, with many highlighting its purposeful ridiculousness. 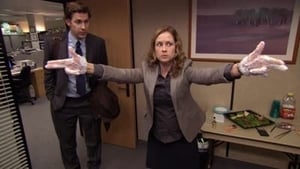